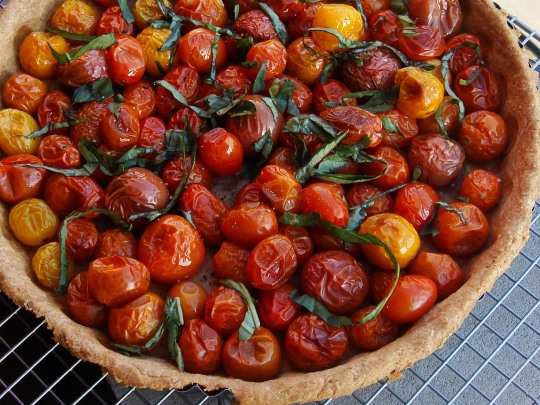 To think that I used to hate, no – loathe, even dispise tomatoes is a true testament to the ever-evolving tastebuds, and/or my own personal shortcomings. My face used to shrivel up, and my hair would stand on end like a defensive feline any time someone mentioned adding tomatoes to a dish.

Ever so slowly, I came around. First, it was non-chunky tomato sauce, which was a great accomplishment. Then, diced tomatoes in that tomato sauce, which was so much more than a baby step, in my opinion, since I was eating visible pieces of tomato. I must say though, my tomato-liking progression was stagnant at the diced tomatoes in sauce for many a year.

Until I was introduced to heirloom tomatoes, which actually wasn’t until last year. Late last summer I was wandering through Green City Market, excited to finally see those Flamin’ Fury peaches piled high atop the tables at the entryway, welcoming visitors, enticing those leaving with bags void of their juiciness. As usual, I was drawn to the free samples, and in one short moment I detached myself from the taste of those juicy peaches to catch a glimpse of what looked like a sight for sore eyes: a wonky, lumpy, bumpy, and strangely-colored ‘blob’ on the neighbor’s table.

Some were green, some purple even, and others traditional red-orange, but with stripes. After a bit of staring, as we humans often do when things look different, I finally realized the stubbly mounds before me were tomatoes, but special tomatoes. I grabbed a few, stashed them in my reusable bag, and made a bee-line for the exit without even stopping for my fourth or fifth free taste of the Flamin’ peaches.

I don’t even remember what happened to all of those tomatoes. I know a couple made it on to burgers for July 4th and I know some homemade pizza was also in attendance that day, smothered with heirlooms and basil. A later purchase of green zebras ended their journey in my belly battered and fried. The others? I could have eaten them whole, for all I know. A true sign that I was a different person, a complete 180 of my former, tomato-hating self.

I like this version of myself much better, new and improved with tomatoes and ready to face the world. 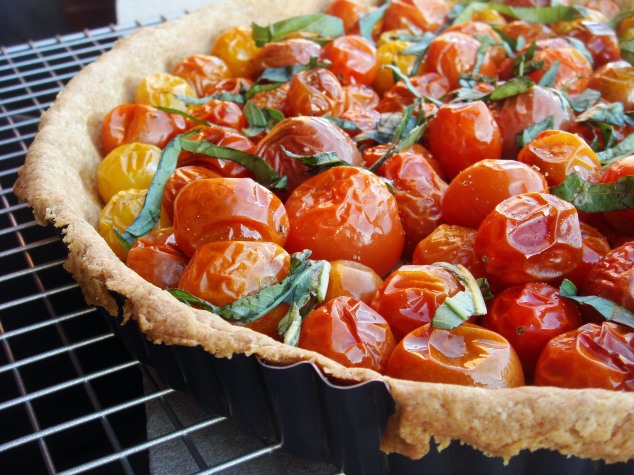 It’s because of those heirlooms that I have now fully embraced all things tomato, minus eating beefsteak tomatoes raw as my mom used to do (and probably still does). So when I saw this tomato tart recipe in Food and Wine my jaw dropped and I immediately found myself salivating. Unfortunately, I was thousands of miles in the air on the way to Seattle, then New Mexico, and thus at least a week away from any remote opportunity to cook this jewel.

Eventually the stars aligned – I was back home and in need of a first course to pair with bouillabaise for a French-inspired dinner party and although there are many things far Frenchier than this, I was in no position to deny myself this recipe any longer and so I forged ahead. Simple, delicate, and bursting with juicy slow-roasted tomatoes, this tart is a perfect welcoming to a slowly-approaching spring. Worth the wait? You bet, but if I were you I wouldn’t. 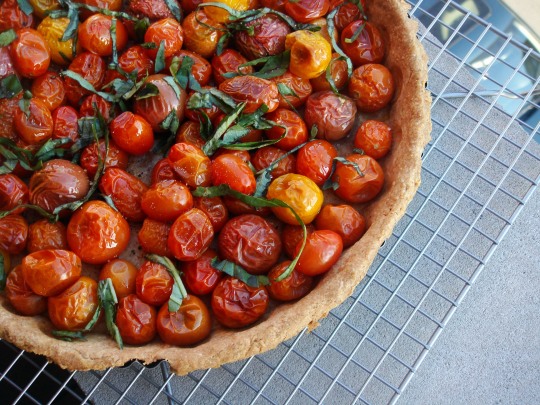 What about you – what are you just dying to make for spring?

instructions
Spray or butter a 9-inch tart pan. In a food processor, pulse the two flours with a pinch of salt and the Italian seasoning until combined. Add the butter and shortening and pulse until the mixture resembles coarse meal. Add the milk and pulse until the dough nearly comes together. Turn the dough out onto a lightly floured work surface and knead a few times. Shape into a disc, cover and refrigerate for at least 30 minutes or until ready for use.

Preheat the oven to 325 F. Roll out the dough to a 14-inch round. Press the round into the tart pan; trim off any excess. With the tines of a fork, pierce the dough softly multiple times, making small holes in the dough. Mound the tomatoes in the shell (they should sort of pile up on one another and be squeezed in together). Brush with olive oil. Bake for about 1 hour and 40 minutes, until the dough is evenly browned. Let cool. Season with salt, garnish with the basil and serve.