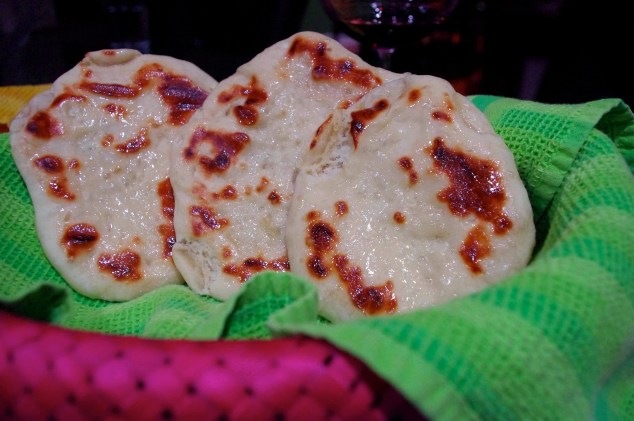 It seems that all the different parts of the world have their own kinda bread. There’s the Irish soda bread – of which I’ve seen about 10-thousand different variations, the eggy, perfect-in-French-toast Jewish challah bread in its pretty twists and braids, the ones that come in loaves at the steakhouses – the so-called Russian black bread, and even sourdough, born and bred (pun intended) in the Bay area (well, not really, but synonymous with SF in the least).

You’ve got your French baguettes, your Italian panettones, and a favorite of mine, cornbread – which to me is from the South, though apparently Northerners try to make it too.

Of course, the lesser knowns include Ethiopian injera which is pancake/crepe-like and a favorite of mine, Indian naan. Some people liken naan to Middle Eastern pita bread, but those people are what I’d call “the crazies”; naan is by far better than any pita bread I’ve ever had.

Plus, I hadn’t made any bread in a while, and as a result I’ve been wondering what sort of yeasted product I might try my hand at next. I’d been planning on making some homemade burger buns, but those wouldn’t go nearly as well with the Indian-spiced short ribs braising away in the oven as a few pieces of naan would, wouldn’t you agree? (More on those later, promise.)

As a bonus, I’ve really taken a liking to freezing half of any bread recipe I make, so the thought of having some of this lovliness hanging around in my freezer was a temptation I couldn’t resist.

The key to perfect naan is rolling the little pieces of dough out as thinly as possible. And seriously – fatty naan won’t be nasty, but you won’t get those bubbles that are so characteristic of the naan you see in restaurants, and the texture will be a bit off, a bit spongy, and maybe at that point a little bit like pita bread. 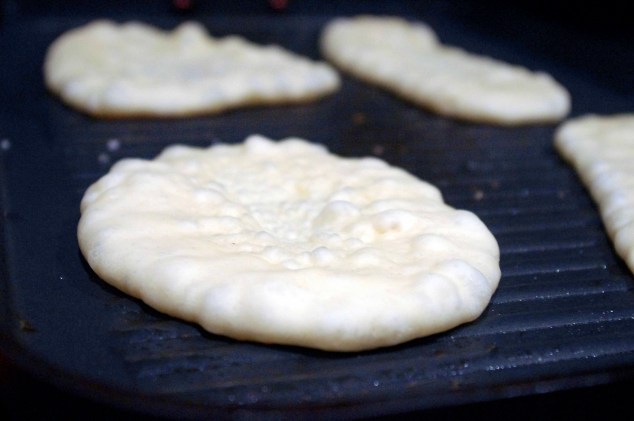 And contrary to what I told Brook when he and Katherine were over for dinner, you really can eat piece of naan after piece of naan with salads, by themselves, or quite frankly, however you damn well please. Although, truthfully, there is nothing better than dipping warm, sea-salt-sprinkled naan into a reduced Indian-spiced braising sauce. It’s worth the wait for dinner, no doubt.

Got a favorite bread? I’m feeling an urge to make more ….

Also, a vacay post will be right around the corner – I hope!

instructions
In a large bowl, dissolve yeast in warm water. Let stand about 10 minutes, until frothy. Stir in sugar, milk, egg, salt, and enough flour to make a soft dough. Knead for 6 to 8 minutes on a lightly floured surface, or until smooth. Place dough in a bowl sprayed with cooking spray or oiled, cover with a damp cloth, and set aside to rise. Let it rise 1 hour, until the dough has doubled in volume.

Punch down dough, and knead in garlic. Pinch off small handfuls of dough about the size of a golf ball. Roll into balls, and place on a tray. Cover with a towel, and allow to rise until doubled in size, about 30 minutes.

During the second rising, preheat grill to high heat.

Roll one ball of dough out into a thin circle (the thinner, the better and more bubbly your naan will be). Lightly spray/oil grill. Place dough on grill, and cook for 2 to 3 minutes, or until puffy and lightly browned. Brush uncooked side with butter, and turn over. Brush cooked side with butter, and cook until browned, another 2 to 4 minutes. Remove from grill, sprinkle with sea salt and continue the process until all the naan has been prepared.

you can also freeze your naan dough. after the garlice has been added, place dough in a plastic bag sprayed with oil and freeze. when ready to use again, remove and let thaw in the fridge. continue as directed above.