I’m probably gonna get a jaw drop or three when I type this, but I love conferences. I’m serious. The large meeting rooms with twenty powerpoint presentations per day, constant career talk and learning about genetics until you’re blue in the face – I can’t get enough of it.

Okay, I’m kidding. I don’t mind them, but not so much for the reasons above. I like the traveling, the visiting with friends, the time away from my desk and clinic, and sometimes (sometimes) coming home with a few good nuggets of knowledge. Of course, to take home those nuggets I have to sit in those large rooms and listen to those powerpoint presentations, and that’s where conferences get a little dicey. 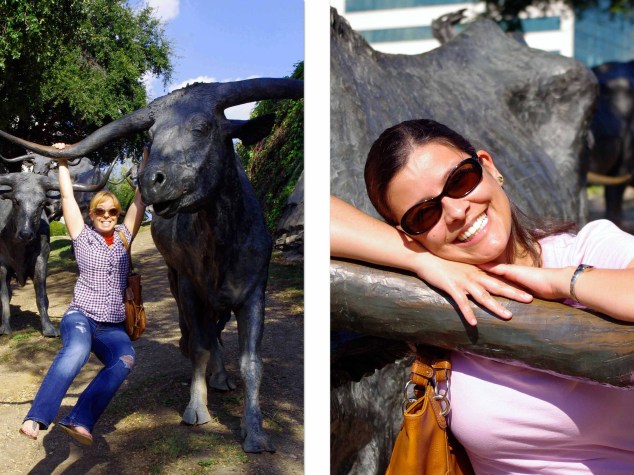 But we’re not here to talk about genetics, or any other conference for that matter. We’re here to talk about Texas. Didn’t you know? Of course, I’m already getting started on the wrong foot, because I can’t quite talk about Texas. The state is huge. Huge. Humongous. Ginormous even. Plus, this was my first official visit there (since connecting flights don’t count here, or ever, really). When I say there, I mean to Dallas. Did I mention that one of my favorite things about conferences is the free travel? Ssssshhhhhh……

And while that travel is ‘free’, in paying for that travel, I agree to sit indoors and listen. Can you believe they made people do that at a similar conference in Hawaii last year? Hawaii, people!!! I refused to go because I knew I’d break the rules. In Dallas, I did follow them, but my friend Rachel and I got there a day early (a half day, really) to tour around, we ate plenty of good food at night, and at the very end of the day, I have to say we had a jolly good time.

For one, the weather couldn’t have been more splendid. I’ve contemplated doing like “the old folks” and migrating south for the winter (or the birds, come to think of it…). Not quite cold enough for a jacket at night, but warm enough for sandals during the day. There was a threat of rain the day of our arrival too, but most of these pictures are from that day – not a drop in sight.

The brick building above doubles as a museum and a visitor center – and unlike some visitor centers, this one was really useful. The lady knew her stuff. Well, with one exception. Rach asked about walking around at night, and she said she “does it all the time”. I beg to differ. Well, I bet she doesn’t walk from Deep Ellum to Downtown at night….. Nonetheless, it was probably worth missing the bus to miss the homeless guy’s banter to get a burger from Twisted Root (links below). 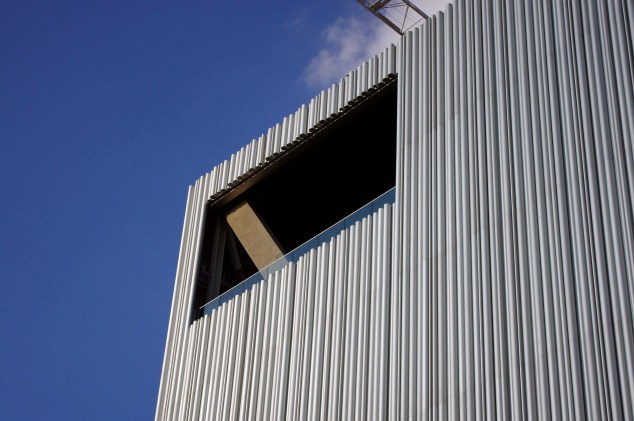 I don’t know what this building is – maybe a Dallas reader’ll chime in? It’s in the Arts District, and it seems to be made of pipes… but that’s about all I’ve got. Maybe my architect buddy Jennifer knows?! Jennifer?

Again, we didn’t have long to travel, but fortunately we were able to get around alright. We walked a lot, but when we weren’t walking we were finding our way around via public transit. Can I add here that I LOVE cities with decent public transit?! I don’t know if the “DART” is something you locals take often, but you should. It’s cheap, and easy. Did I  mention there’s a free trolley? Check it out – it’s so old-school. The guy takes off his ‘gears’ and switches to the back at the end of the route. The seats flip too. We know ’cause we rode it to the end and watched :).

I may not have had any brisket (yes, I know…. lame!!!), but we made sure to find a truck with horns on the front. You don’t go to Texas without finding horns on trucks. Geezzz….

Pioneer Park is a modern-day account of the original Shawnee Trail of the 1850’s. A couple dozen longhorns are being driven by cowboys on horseback amidst vibrant landscaping and waterfalls; this is supposedly one of the biggest outdoor public areas in the city and one of the larger bronze sculpture parks around. Rach knew about this place and I’m glad she did – it’s definitely worth walking through, and since it’s near the conference center, it’s probably a decent spot for a picnic lunch.

Aside from the sights, we certainly had our fair share of good food. If nothing else, I always do a little food research to find a couple of reputable restaurants to try out. For the ‘fancy’ meals, we went to Craft (my chef crush Colicchio wasn’t there….) and Stephan Pyles, and for the lo-key spots it was tapas and burgers. My favorite? Definitely Stephan Pyles – the short ribs were hands down the best short ribs I’ve ever had.

I’ve had this particular short rib recipe lying around for a few weeks, and have been dying to share it. No, it doesn’t have a thing to do with Dallas, but since the short ribs were my numero uno meal of the week, I figure it’s at least somewhat appropriate. These are spiced with garam masala, braised in a root veggie-tomato-red wine sauce, and served alongside a side dish of carrots that were, you guessed it, braised as well, but in beer and carrot juice. Succulent, tender, and definitely perfect for October – the dish just happens to work well alongside some garlic naan. Just sayin’.

Do these short ribs, or the ones from Stephan Pyles make up for missing out on Texas brisket? Probably not, but even if it did I wouldn’t tell ya. Ya don’t mess with Texas, and you certainly don’t mess with the brisket. The short ribs will have to do for now, but somehow I think we’ll all manage, don’t you?

instructions
short ribs
Preheat the oven to 325 F. In a small skillet, toast the garam masala over moderately high heat, shaking the pan constantly, until fragrant, about 2 minutes.

In a large enameled cast-iron casserole, heat the oil. Season the short ribs with salt and sear them over high heat until browned and crusty all over, about 15 minutes. Transfer the meat to a plate.

Transfer the meat to a baking sheet. Strain the liquid into a saucepan. Skim off and discard the fat that rises to the surface. Boil over high heat until the sauce is reduced to 1 cup, about 15 minutes.

Preheat the broiler and position a rack 8 inches from the heat. Brush the meat with some of the sauce and broil for 3 minutes per side, until browned and sizzling. Sprinkle the meat lightly with garam masala, then slice it 1/2 inch thick. Transfer to plates and serve with the remaining sauce.

carrots
Peel the carrots so that the thick ends are roughly the same width as the thinner ends; cut each carrot in thirds crosswise. Put the carrots in a medium skillet with the carrot juice and beer and bring to a boil. Cover and simmer over moderate heat until the liquid is reduced by half, about 10 minutes. Add the sugar, cover and cook until tender, about 10 minutes. Transfer the carrots to a plate.

Whisk the butter into the sauce and simmer until thickened, 1 minute. Return the carrots to the skillet, season with salt and toss to coat. Transfer to plates and serve.

**carrots are NOT gluten-free, but are if you use a gf beer!

9 thoughts on “Don’t Mess with Texas”