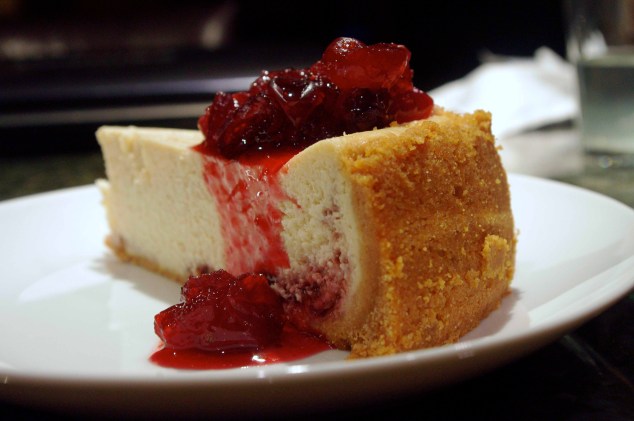 I used to be the girl who poured Aunt Jemima’s butter-lite pancake syrup all over flapjacks constructed from a couple cups of Bisquick, eggs, and milk. Sure, I was tempted by the ‘just add water!’ advertisements on competitor boxes (or jugs?), but the idea of adding water to flour and having great-tasting pancakes was just a little too farfetched for me. Call me crazy, but the ‘just add water’ brands and Bisquick were as different, in my mind, as apples and oranges.

Eventually, I started making pancakes from scratch. I realized the only difference between pre-packaged mixes and from-scratch ‘cakes was that Bisquick already added the salt, sweetener, and leavening (along with some other crap – partially hydrogenated soybean oil, anyone?). Those are all ingredients that are ever-present in my house, so making my own pancakes was an easy transition. Easy, and so much tastier.

The fact of the matter is that Aunt Jemima remained a regular guest in my kitchen for much longer than the box o’ mix, and much longer than I should probably admit to you. I’d gotten rid of all sorts of artificially flavored foods – the coffee creamers, the teriyaki sauces, even the pre-shredded cheeses – and until less than a couple of years ago, I insisted on having Aunt Jemima sit at my breakfast table. Don’t get me wrong – I’m not claiming to be a “I only eat natural, non-processed foods” person – you’ll still find your fair share of processed foods in my kitchen, just a lot less than in the past. But one day, I fell in love with Aunt Jemima’s healthier, less superficial, distant cousin – I fell in love with maple syrup.

I can’t remember how, or when it happened. I’d guess we had pancakes one morning and when I reached into the pantry to get the AJ syrup (butter-lite!), it was gone. But however it happened, I converted, and maple syrup became a new favorite.

To me, maple syrup is the epitome of fall, next to pumpkin and perhaps cranberries. And while it may not seem very fall-like for many of you (hello, east coast; hello, midwest), it’s technically not winter quite yet. 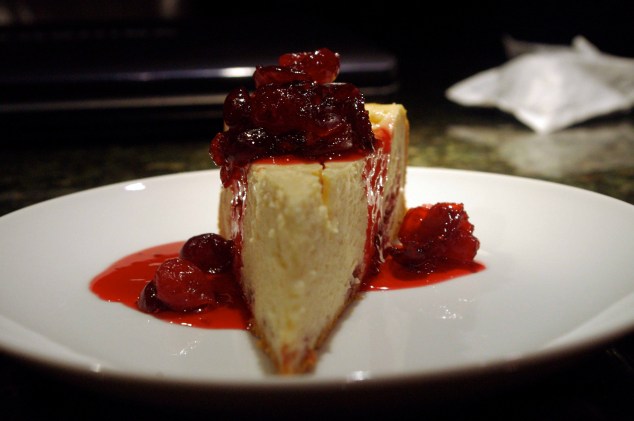 This is a dessert that’s sure to make you think it’s still fall on the inside, even though it’s definitely much chillier than I have ever remembered mid-December to be on the outside. Consider it one final ode to Autumn – beautiful for sure, but way too short in our neck of the woods. If the toe-numbing weather isn’t enough to keep you indoors, perhaps this will do the trick. Of course, if you’re an awesome supervisor and you made this cheesecake for a rotating student, that’s an exception…

the original recipe called for reduced maple syrup, but i think it’s plenty maple-y without reducing it. also, i had some leftover homemade cranberry sauce from Thanksgiving, so I pureed that with water and spread about 1/2 c of that over half of the cheesecake filling, then filled the remainder over it for a ‘cranberry sauce layer’. if you don’t have it, it’s not important enough in the outcome to make it, but if you do, go for it!

Bake cake until slightly puffed around edges (center will still look moist and will jiggle a little when pan is gently shaken), about 1 hour 30 minutes. Transfer cake to rack and cool completely. Cover and chill overnight.

compote
Combine all ingredients in heavy medium saucepan. Stir over medium-high heat until sugar dissolves and mixture comes to boil. Reduce heat to medium and simmer until berries pop, about 4 minutes. Cover and chill. Rewarm over medium heat before serving.

2 thoughts on “Ode to Autumn”