You know what? I’ve been thinking a lot lately. This may come as a surprise to some of you, but it’s true. Mainly, I’ve been ruminating about this wee ol’ life-changing event that’s coming along rather quickly, and all the eensy-teensy pieces that have to fall into place over the next few weeks.

When I’m not running all of the possible iterations of how things are going to shape up over the next few months in my mind, I’m reminiscing about life in Chicago, staring at the skyline as I’m taking the bus into work, and cramming in all of those “Chicago lasts” into the early 2011 months.

Chris and I had our last “last” together this past weekend, and thus began Phase 2 of this feat. We crammed a lot of great restaurant visits into the last two weeks, including Schwa (finally!), Topolobampo (again, finally!) and a regular, Hot Chocolate. For our final weekend together, we figured it totally appropriate to head to one of our very favorite restaurants in Chicago, Bonsoiree, for a Valentine’s day tasting menu. The dinner was amazing, as was expected, and we ended the night with a nice walk (most of the way) home followed by one last movie watched (well, half of it – I nodded off, as usual) together in our condo, a warm fire burning and crackling in the background.

He flew out early Sunday afternoon, and I drove him to the airport and watched him walk away, bags in hand, a nervous smile on his face. My eyes were filled with tears, just like they are as I type this, but not because we’re now living apart until April, as we’ll fortunately see each other a couple of times between now and then, but because it’s the true beginning of a lot of unknowns, a lot of change. 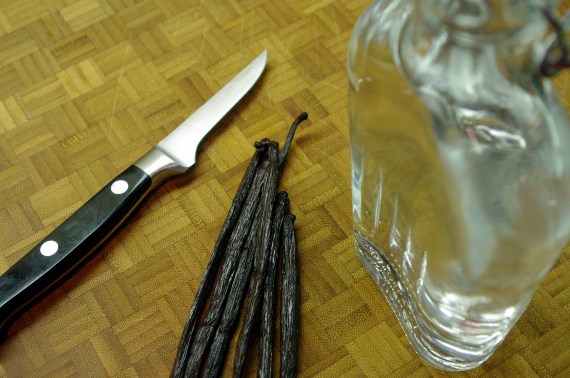 I got back into the car and cranked up some music, which, when Chris aka my DJ isn’t in the car with me, means that I play my Christmas mix from 2009 over and over. Don’t get me wrong, my 2010 mix was nothing short of awesome, but I haven’t managed to take the CD down to the car yet. The first song that played was a Dave Matthews song, You & Me, and the tears started all over again. It’s appropriate though, that song, as if he left it there – on track 5 – on purpose.

It got me to thinking (I know – again!): this whole process, it really isn’t that big of a deal. Really. Sure, were it just lil’ ol’ me heading out West, I’d be terrified. But it’s not, and I’m not. This is an adventure, a new journey, a new Chapter in our lives, and as much as I hate to rush time, I can’t wait for these next few weeks to end and for that new Chapter to begin. I know things will all work out, I know this move couldn’t be more perfect for us, and I know we (cats included) will love San Francisco.

I realized this: when you’re in love, and when you’re happy, there are no doubts in life. None.

It’s just that some things take time. Simple as that.

time commitment: this is a recipe that takes some time – at least 2 months (5 minutes active)

Sure, vanilla beans are expensive, but buying good quality vanilla extract is expensive-r. I buy vanilla beans in bulk from here, and then feel less guilty using them more freely. once you make your own, you’ll never go back to buying store-bought extract – promise.

instructions
using a small knife, slice open the three vanilla beans and shove into a fancy bottle. measure out your liquor and pour into the bottle. close and shake gently.

store bottle in a cool, dry place for at least 2 months – the longer, the better.

6 thoughts on “Some Things Take Time”