I don’t pretend to pay too much attention to what goes on around here. Oblivious? Well, no. But truthfully, I more or less talk about whatever recipe is on my mind without so much as a thought about whether it’s been pasta overload or slim pickin’s in the sweet category, or you know, more of that.

But for once, I actually did do that. Think, I mean. And this resulted: we are way overdue to talk about macaroons.

Not to be confused with the adorable macaron, these here morsels of goodness are feisty while the French similarly-spelled-but-that’s-it treats are graceful. Macarons are intimidating, what with their folding and piping and turning on and off of the oven; macaroons can be made in one’s sleep, or while intoxicated, or both. Macarons are a tease, but macaroons are, well, easy.

I can’t imagine a macaroon without shredded coconut, but I can envision exactly 10,148 ways of flavoring macarons. 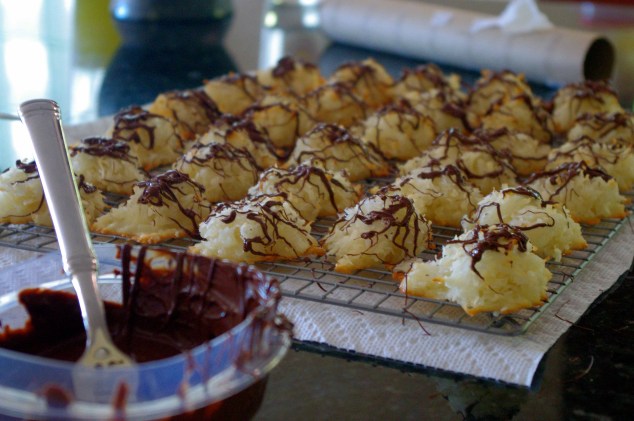 Let’s face it: we all like a few challenges in life, but at the end of the day, these little things, treats that are always way overdue, these are the ones we appreciate the most, aren’t they?

stir together egg white, sugar, vanilla, and a pinch of salt until combined, then stir in coconut. divide mixture into small mounds, dropping onto baking sheet about 2 inches apart from one another.

bake until tops are pale golden in spots, ~15 minutes, then carefully lift parchment and macaroons and place on baking rack to cool completely (they will harden more at this point), about 15 minutes.