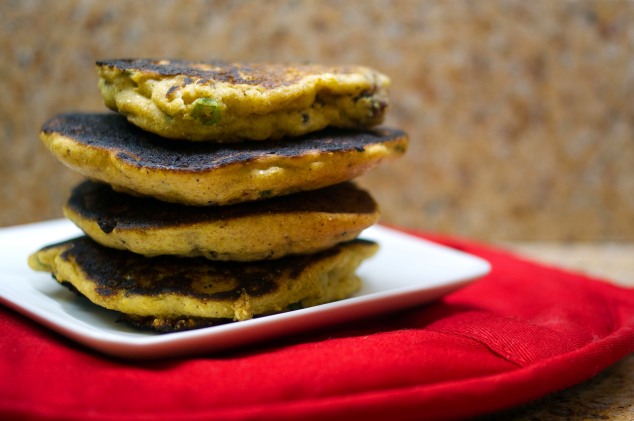 I sort of have a sort-of addiction to reality TV. But I’ve come a long way, really I have.

I used to watch The Apprentice, Dancing with the Stars, Real World,  The Amazing Race, Chopped, The Next Food Network Star, and pretty much anything on MTV and Food Network. Oh yeah, and The Bachelor/Bachelorette. Thanks for reminding me of that one, Caroline!

Now, I only watch Survivor and Top Chef. Well, and The Next Iron Chef. Duh. Yes, just three! Somehow, my ultra-long list of guilty pleasures was whittled down to just three lil’ ol’ shows. I consider myself fortunate, because I never got into the Real Housewives of Blank or the Extreme Makeovers or the Biggest Losers or the Kardashians or whoever the famous rich people shows are about these days. Heck, I only watched 1 little season of American Idol. And I could care less about The Voice because I don’t like any of the hosts. So….. maybe I’m not that addicted, after all?

Frankly, I could cut out Survivor, but Chris would just die. We’ve watched it for. so. long. that we just can’t stop now!, he says. And truthfully, there is always someone to laugh at, although this season I’m almost embarrassed to be a girl since these chicks can’t seem to get it together. But whatever.

But I can’t not watch Top Chef. Yes, sometimes it’s a train wreck. Yes, sometimes I wonder how certain people even make it to being on the show. And yes, I’d just love to see what happens when the cameras aren’t rolling on those judges because I swear they are three sheets to the wind every night. But I do look forward to it every week, and sadly the last season just wrapped up, so I’m Top Chef-less for a bit.

Ed Lee was one of my favorites this season. I think he made it to the final 5 before he got the boot, although I’d expected him to be in the top 3. I do think the final 2 were the ones who deserved to be there, but even so, Ed was always a favorite of mine and for good reason – he effortlessly combined Asian and Southern comfort food – my favorite cuisines. What’s not to love? 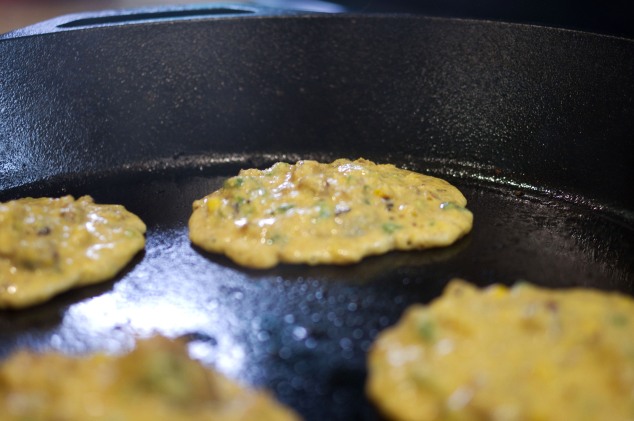 Anyway, Ed already gets plenty of media attention, because he’s awesome, so I’m sure that not winning Top Chef won’t hold him back in the slightest. A while back, he was featured in Food & Wine, and he shared a recipe for these corn griddle cakes that I could not stop thinking about. And since we aren’t usually up and cooking breakfast on the weekends, I didn’t want to wait until we had company to try them, so instead we just had them for dinner one night, and I froze the rest so I could have them on a special morning when we’re out of cereal and oatmeal.

The griddle cakes are so freakin’ tasty that I could probably eat them straight outta the freezer (well, with a little zapping…), but the orange-honey butter adds a perfect element of sweetness, reminding you that these aren’t just everyday breakfast cakes. They’re special, for sure.

Zucchini Cornbread (aka why my butt’s so big. go ahead, read the story..)
Hushpuppies (these didn’t help, either)
Cornmeal-Blueberry Cookies
Rhubarb-Cornmeal Tarts
Andouille & Sweet Potato Pie

instructions
orange-honey butter
Melt butter in a small saucepan over low heat. Whisk in honey and orange zest. Season to taste with salt and pepper. Cover and keep warm.

corn cakes
Cook sausage in a 10-12″ cast-iron skillet or other large heavy nonstick skillet over medium heat, breaking up into small pieces with the back of a spoon, until browned and cooked through, about 8 minutes. Using a slotted spoon, transfer sausage to a small bowl. Add corn to same skillet and cook over medium-high heat, stirring often, until browned, 5–6 minutes. Transfer corn to bowl with sausage and let cool.

Whisk cornmeal and next 7 ingredients in a medium bowl. Whisk buttermilk and eggs in a large bowl; add dry ingredients and whisk until just combined. Fold in sausage, corn, and scallions.

Heat 1 T butter (or oil or spray) in skillet; working in batches and adding butter as needed between batches, add batter to pan by tablespoonfuls. Cook until cakes are crisp and golden brown, 2–3 minutes. Turn cakes over and cook until browned, 1–2 minutes longer. Transfer cakes to paper towels to drain. Serve warm drizzled with orange-honey butter.

4 thoughts on “Special, For Sure”