Shortly after Chris and I officially started dating, we went on a road trip with his parents up to Pennsylvania to visit family. His parents grew up in the Northeast, so the area up there is special to them. I remember that Chris was pretty excited about it, and I remember Barry, my now-father-in-law, teaching us the “ways of the road” – things like freeway etiquette and so forth.

One of the basic tenets of freeway etiquette is this: when lanes are merging, each car in the merged lane lets one car from the merging lane in. It keeps traffic flowing as smoothly as possible. The douchebags trying to speed past and butt in are otherwise honked at, flipped the bird, or if it’s warm enough outside, you roll your window down and yell all sorts of obscenities at them. Welcome to the Northeast.

Needless to say, the “foreigners” always get yelled at. Most people unfamiliar with city driving will undoubtedly let cars and cars and cars in, especially the nice Southern folk. The Midwesterners are the ones who cut people off, as do the New Yorkers. The West Coasters? I dunno, maybe they just stay on the West Coast (I can’t blame them). Don’t you just love stereotypes? 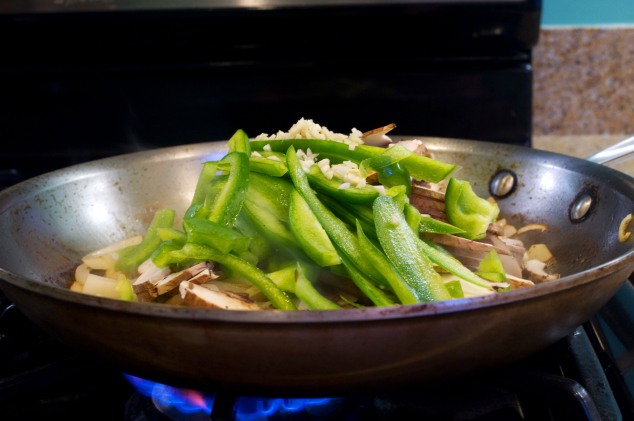 Speaking of stereotypes, Philadelphia has always been stereotyped as the place to go for cheesesteak. This is something I’d think of as a pretty freakin’ awesome stereotype, sorta like saying that Southerners give the best hugs (it’s true), that Italians make the best pasta (also true, in my experience), and that San Francisco has a lot of hipsters (generally awesome, but sometimes annoying).

It was almost 10 years ago that we went on this road trip, so I can’t for the life of me remember where we went to eat, but I know they insisted on going to one specific place for a Philly cheesesteak. I don’t think it was in Philadelphia, since I don’t think we went to Philadelphia on that trip. I remember Barry really hyping this place up, and getting more and more excited about it the closer we got. And even though it wasn’t in Philly proper (I think), I remember being pretty blown away by the caliber of meat-filled sandwich goodness. I remember a lot of gooey cheese and if my memory isn’t failing me and instead plugging in nonexistent happenings, I think Chris’ parents even came across someone they knew in the restaurant, which to me, further solidifies the awesomeness of a place. So forgive me if I made that up, but I really don’t think I did.

I’m not sayin’ this recipe I’m sharing is the same caliber of awesomeness as a Philly cheesesteak. First, it needs three times as much cheese, then twice as much steak, and less veggies. I think I’ve even heard that some Philly cheesesteak places use Cheese Whiz now, and that’s definitely not going on with this sandwich. But at the end of the day, when you live on the other side of the country amidst, let’s face it, restaurants with a greater focus on avocado and turkey sandwiches (which are nothing to ignore out here), it gets the job done.

And for sure, that’s a memory I know is accurate. Probably because it only happened a couple of weeks ago, but still, it’s true. 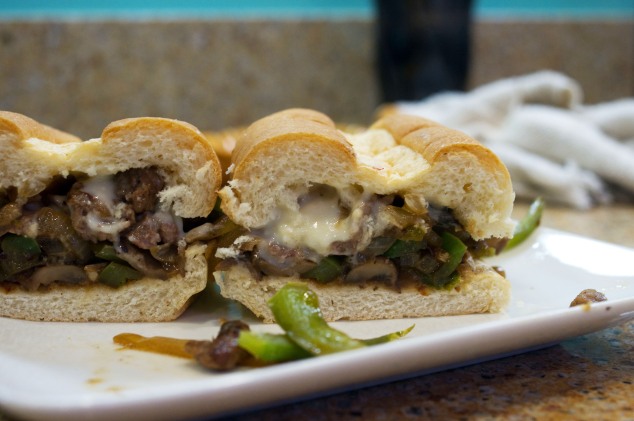 instructions
Place beef in freezer for 15 minutes. Cut beef across the grain into thin slices. Sprinkle beef with salt and pepper. Remove brown gills from the undersides of mushroom caps using a spoon; discard gills. Remove stems and discard. Thinly slice mushroom caps and cut slices in half crosswise.

Place flour in a small saucepan, and gradually add milk, stirring with a whisk until blended. Bring to a simmer over medium heat; cook 1 minute or until slightly thickened. Remove from heat. Add cheeses and mustard, stirring until smooth. Keep warm (mixture will thicken as it cools).