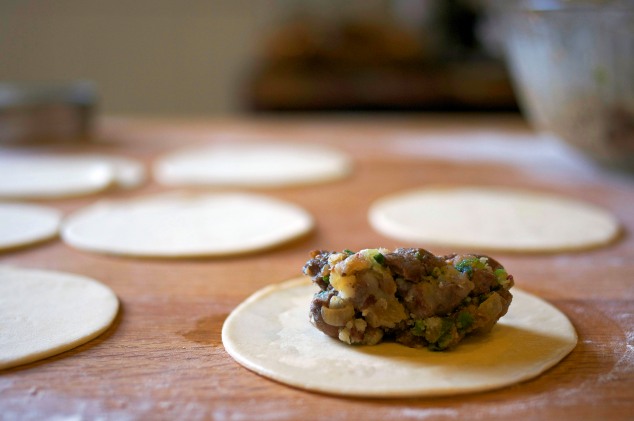 As you may have read, I didn’t make any crazy New Year’s resolutions. I’ve found that, despite my best efforts, any resolution is well-intentioned in January and February, but come March, they sorta become forgotten. So because of that, I’m just going to resolve to make more reasonable goals throughout the year. It’s just more manageable that way.

That said, I’m sure you also indulged a little more than usual in December, right? We always go back East, to North Carolina, over the holidays to visit family and friends and as much as I like to feel in control, I really can’t be bothered to think too hard about all that I’m eating, and of course, all that I’m not (like salads and veggies). Bless their hearts, my family loves to eat. We had a pig pickin’, and if that wasn’t enough, we also had chicken pastry and fried chicken “on the side”. hahahaha. 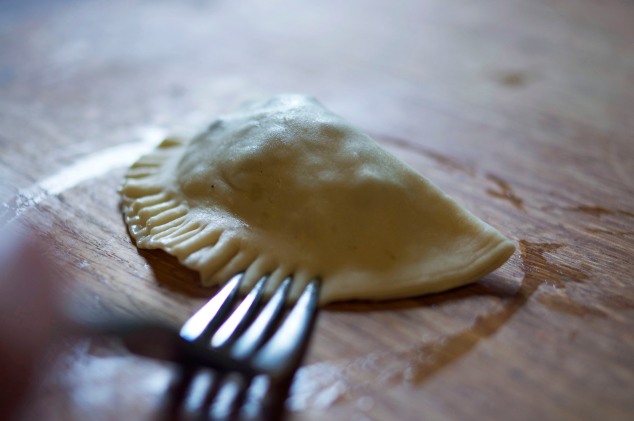 The week after Christmas should have been a week to clear out all the badness, but we were still in NC, and even though Chris’ side of the family follows a more balanced eating lifestyle, there are still sweets galore, and man I do love the sweets. So when it came time to finish off the year, I really didn’t see a need to start all healthy and fresh right away. We figured we’d go ahead and load up on a little more meat, and like everyone else, take it a little easier after midnight. Okay, who am I kidding, not after midnight, but when we woke up the next morning. There are still treats to have after midnight.

So I made an Argentinian feast for six (that probably would have fed 12). MEAT!! We started out with a lighter ceviche (they do eat fish down in South America, by the way), then went straight into the meat with these tasty empanadas. Crunchy, flaky, and filled with beef, I could have eaten more than 2 but I stopped because I knew the third course was ready to be grilled and served. And that, my friends, was a huge plate of lamb spare ribs with chimichurri.  Very tasty. 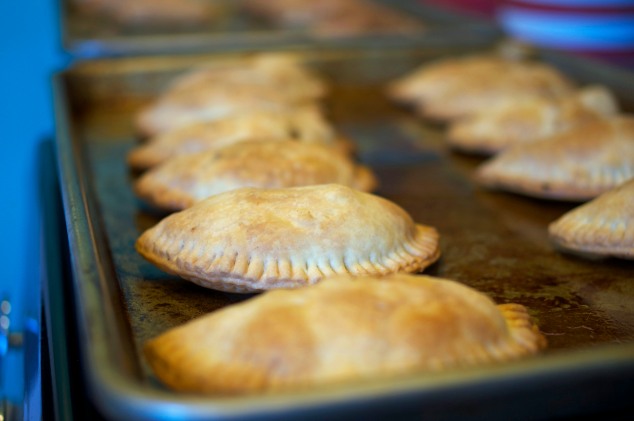 other than the fact that these are awesome, the other best part is that you can easily make these in advance, refrigerate them, and reheat them in a 350 F oven for a little bit. you can also freeze them, unbaked and cook them straight from the freezer (obviously, you have to add more time). you can use whatever sauce you like, but I made another batch of crema from the tamale recipe.

time commitment: about 1.5 hours of active time, but include up to 8 hours total for refrigeration, baking, etc.

instructions
make the filling: In a very large skillet, melt 4 T of the butter in 1/4 cup of the lard. Add the diced beef, season with a generous pinch each of salt and pepper and cook over high heat, stirring occasionally, until browned and any liquid has evaporated, about 8 minutes. Transfer to a large bowl, pouring any fat in the skillet over the beef.

In the same skillet, melt the remaining 2 T of butter in the remaining 2 T of lard. Add the onion, bay leaves and a generous pinch each of salt and pepper and cook over moderate heat, stirring, until the onion is soft and golden, 10 minutes. Discard the bay leaves. Scrape the onion and any fat over the meat and let cool slightly. Stir in the scallions, cumin and red pepper; season with salt and black pepper. Refrigerate overnight or at least for a few hours to let the flavors meld.

make the dough: In a small saucepan, bring the water, butter and salt to a simmer. When the butter is melted, pour the mixture into a large bowl and let cool to room temperature. Add the flour and stir until the dough comes together. On a lightly floured work surface, gently knead the dough until almost smooth but still slightly tacky with some streaks of butter. Divide the dough into two pieces, wrap them in plastic and refrigerate until firm, at least 1 hour or overnight.

Preheat the oven to 400 F and oil/spray 2 large baking sheets. Work with 1 piece of dough at a time: On a generously floured work surface, roll out the dough 1/8 inch thick. Using a 5-inch round plate or cookie cutter, cut out 8 rounds of dough. Moisten the edge of the dough rounds with water. Mound 1 1/2 packed T of the beef filling on one half of each round and fold the dough over to form half moons; press the edges to seal. Pinch the edges at intervals to make pleats or crimp with the tines of a fork. Repeat with the remaining piece of dough to form 8 more empanadas.

Place the empanadas on the baking sheets and bake in the upper and lower thirds of the oven for 35 minutes, shifting the pans once halfway through, until browned. Serve the empanadas warm or at room temperature.