I’m sure I mentioned somewhere in this blog that both Jennifer and I kept journals along the way. Jennifer was better than me about writing in hers every night – I’d occasionally decide that I had something better to do, like concentrating really hard on making sure I stunk up the tent more than Jennifer after dinner. I have to proudly admit that I’m pretty sure I won those battles most nights, but when Jennifer competed, she competed hard. Our best contests were those when our new friends could hear us in the tent nearby; after our group bonding at Red’s Meadow, we pretty much stayed in the same spot as those guys every night, so the ‘fun’ was just getting started ;).

Anyway, I bring up the journals because I just read my post following Day 7’s hike. This was the first day we had worried about rain, and some reports had said possible storms that day, so we debated starting later in the day, but ultimately didn’t, and instead took advantage of getting out sooner since we didn’t have a tent to pack up, etc. As it turned out, that was a really smart move since we hiked over 15 miles on Day 7 – I’d hate to think of when we would have gotten to camp had we tried to wait for rain!

J: This was the first day we were up and out hiking before any of the rest of our hiking buddies.   It’s solely because we didn’t have any packing to do and knew we were slower hikers than them so got up early to get a much needed head start.  It was so nice to just wake up, put on our shoes, eat some pop-tarts (toasted!), and head out the door!

notice the distance to Mt Whitney – 165 miles to go! Also, we were walking away from showers and cold beer 😦

The first section of trail out of Red’s was more or less a continuation from some of the barren wasteland part of the hike from Day 6 – but this time the barren-ness was from a fire, not a wind storm. It has a really eerie vibe walking through it first thing in the morning, with the threat of rain not far away. But we continued on, hoping we’d be on the upside of that “chance” of rain.

J:  I thought this part of the trail, while a bit creepy, was also sort of beautiful.  I wished I knew anything about photography because the lighting from the storm clouds contrasting with the sometimes weirdly shaped trees was all sort of amazing.  Or we’d just seen so many “normal” pretty landscapes with all the lush forests, alpine lakes, and mountains that it was a nice contrast. We didn’t spend much time stopping to take photos anyway because of the fear of being above the treeline on top of the mountain when the thunderstorm hit.

Of course, it wasn’t long after this area that we started heading up in elevation and into a wooded area, where we found ourselves faced with a few drops of rain. Jennifer and I differed a little with regard to our rain preparedness – Jennifer had pre-fashioned a trash bag before leaving home that had holes perfectly cut for her backpack AND one for the tent below as well. I had borrowed Chris’ rain cover that came with his pack, unsure if it would really fit since neither of us had ever used it, or tested it in the rain. I really wasn’t in the mood to worry about rain until it was a serious downpour (stay tuned!), but I think Jennifer was secretly excited about her MacGyver-style rain cover, so she tied that thing on, playing it safe in the event that the rain really started coming down.

J:  I was a little excited that I’d saved some cash on a pack cover and my cheapo trash bag was working just as well.  Also…now I’m pretty excited to be compared to MacGyver! 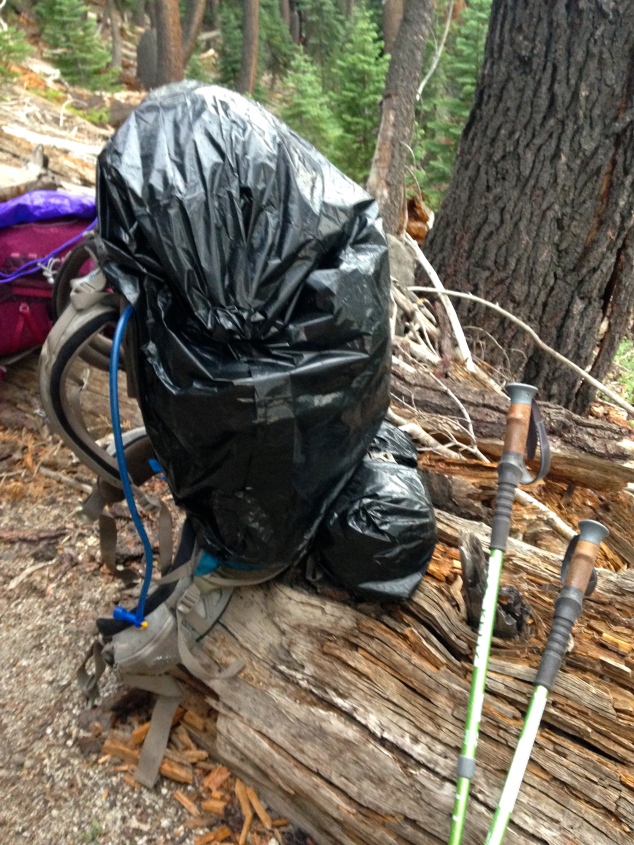 Fortunately, the rain didn’t stick around for long that morning. I was probably more wet from fresh sweat than from rain, which was  good thing. 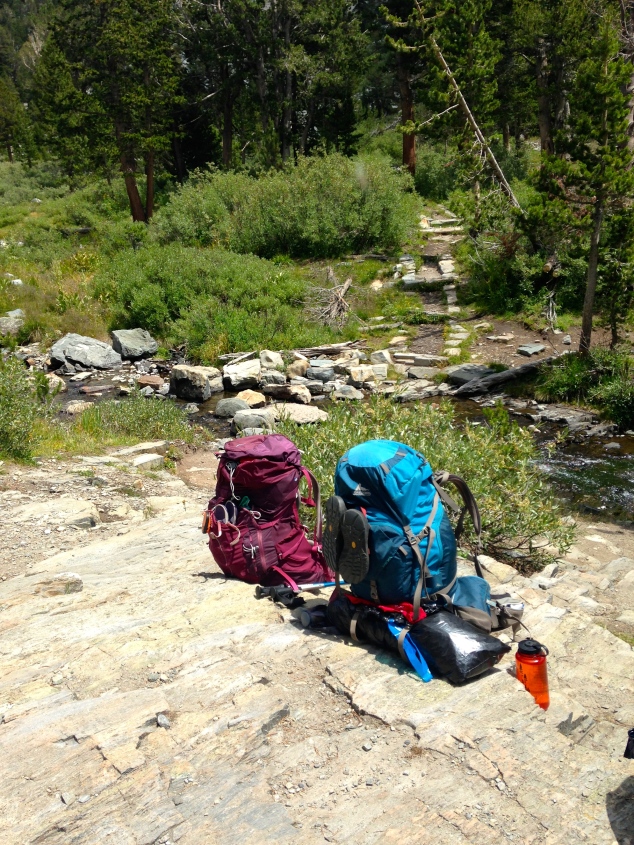 Although we were both refreshed from a bed, shower, and milkshake the night before, we were both on the slower side for most of the day. Jennifer’s altitude sickness was long gone, but her blister situation was just getting started, and I had a little blister of my own from the long hike downhill the day before. For me though, the blister wasn’t as big a deal as the general soreness in my feet each morning that I learned would be a permanent situation from here on out (not to mention months after this trip). I was starting to appreciate packing what I thought was a generous supply of Ibuprofen.

J:  If you ever do this hike (or any thru-hike) pack more Leukotape, moleskin, or duct tape than you think you need.  I get blisters all the time from running, so I thought I was prepared.  I most definitely was not…more on that later. 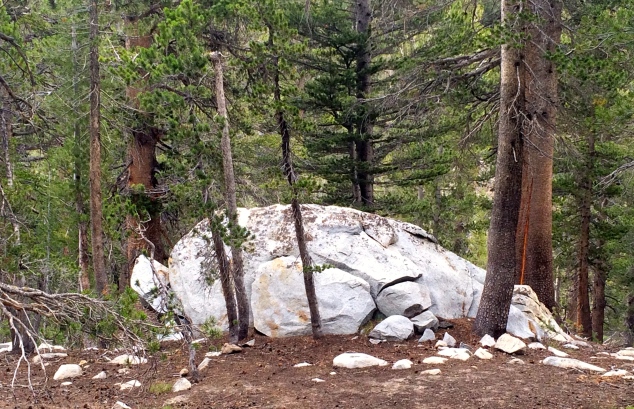 There were a couple of notable rock structures along the JMT. The one above is clearly a turtle rock (you see it, right?), but the one later in the trail is even cooler. More on that in a few days (well, probably a few months if you think in real time of our writing pace….).

view from camp, Lake Virginia, right before the sun set.

While the rain held off earlier that morning, it became clear later in the day that we weren’t going to stay lucky for long. We kept worrying about thunder and lightening since we were, you know, hiking on giant rocks, but by the time it had all started, we were only a couple of miles from our planned destination. Had we not had a 20-mile day ahead of us to get to our pre-reserved yurt (and ZERO DAY!), we probably would have stopped at the prior campsite, but we knew we’d need all the help we could get. After a decent day of incline, we finally made our way to Lake Virginia Inlet where we reunited with Brittany, Courtney, and Andrew. The lake itself was gorgeous, but we didn’t have a ton of time to relax before sunset, and definitely not time for a lot of photos.

We pretty much had just enough time to set up camp, share a giant bag of jambalaya (which “did not suck”, a phrase coined by Jennifer and used by us all routinely after this night when eating, doing, or seeing something awesome)…

J:  Heather failed to mention that we also had a bit of a blow-up while we were setting up camp.  I think the long days were getting to us and we were both in need of that zero day.  I was pissed at her, but that jambalaya definitely did not suck and made things a little bit better.

…and then the bottom fell out. Rain, thunder, lightening, and all – we were definitely not going to experience a rain-less JMT!  As much as that part did suck, I think we both had visions of a free day taking up most of our thoughts, so there wasn’t much that was going to stop us the next day, even if the rain continued.

Hey! Here’s a link to all JMT posts for your reading pleasure 😉. You’re welcome.