I hate to start the post by complaining, but damn, Day 15 was a really rough morning. So I’m going to.  For starters, there were so many hikers at camp the night before that there was practically nowhere to poop this morning without someone either 1) watching you or 2) running into you while you were mid-poop. We expected the campsite to be relatively full due to it being the closest one to Mather Pass, but geez, it was like every person hiking the JMT decided to stop at Lower Palisade Lakes. And it wasn’t even right on the lake!

J:  Either we had jambalaya for dinner the night before or I was just nervous about having zero privacy, but somehow I woke up at 5:30 am (about half an hour before almost everyone else) and practically ran out of the tent.  I beat the crowd and found a spot behind a huge rock far enough from the rest of the camp sites to take care of things pretty quickly.

Once my ‘bizniss’ was taken care of (in case you were wondering, I was only seen by 1 person – that I know of), we moved relatively quickly to get out of camp, and if I recall correctly, this meant I didn’t have any morning coffee (I didn’t write that down in my journal, probably because I wanted to forget it, but I do recall this happening which added to said unhappiness). Also, it was the coldest morning we’d had, and my cheap ass cotton gloves were simply not doing the trick. Despite the fact that we were ascending, it took a good 30 minutes to warm up, and then, of course, we had to stop and shed a layer or two since we were just going up and up.

shady, freezing north side of the pass with Palisade Lake in the background

On top of all that nonsense, this pass was really fucking hard. Or maybe it was hard because of those things? I don’t know – I just didn’t have my A game with me. More like a B-. It was a loooong 3.8 miles to the top, which was an elevation gain of 1,500 feet. It felt like it just kept going and going; you’d round one corner only to have another – it felt like we were hiking all around the pass, but never close to it. I remember looking up once and seeing Brittany and Courtney – they seemed so. far. away (probably because they were). They waved once, and I just wanted to shoot a harpoon at them. I’m only half-kidding here. 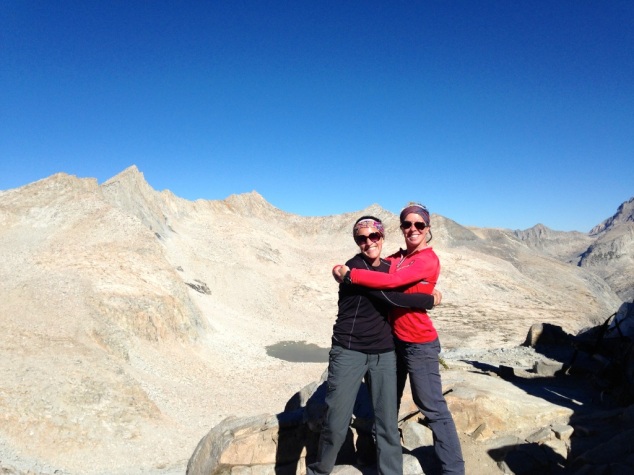 view of the sunny, but steep south side of the pass

In case you’re dying of suspense – we finally made it to the top and it only took about 1.5 hours, which isn’t too shabby I suppose. Notice there are no pictures until then. We putzed around a little and left pretty soon because 1) there was not much room there and 2) we got cold again. 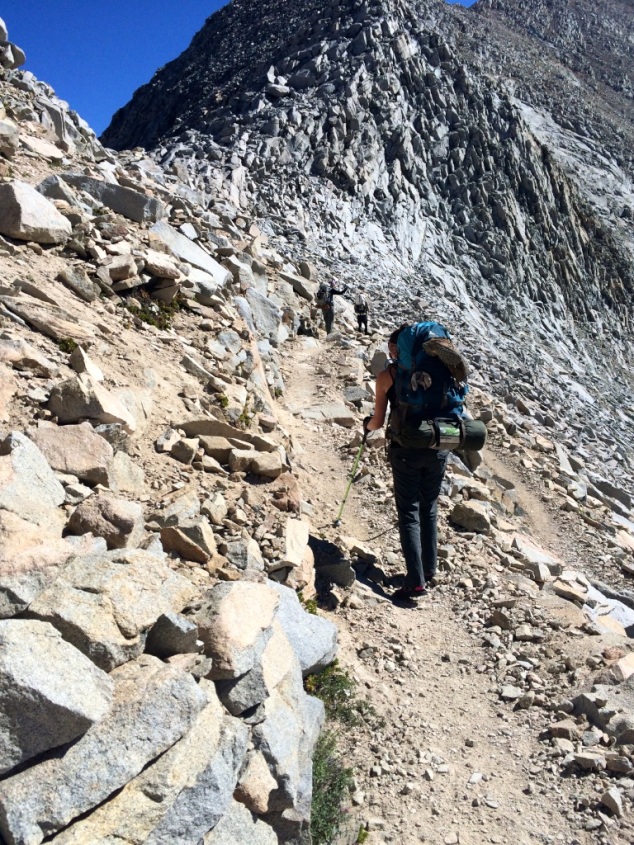 And as the world turns here in JMT land, we started our descent, which was a little steeper than the trip up, and the wind really knocks you around on the way down. I think this is the descent where Jennifer opted for hiking sandals instead of her boots to see if that helped with going down, since that seems worse on the blisters and blisters in blisters. I’ll let her elaborate here though…

J:  I DID put my Chacos on to hike down the steep side of the pass.  I probably should have just hiked in my Chacos the whole time since my feet were still so swollen, but I was worried about getting too much dirt and debris in my open blisters causing infection.   So, I just tested it out on the downhill.  Which was awesome…until I stubbed my toe on a huge rock.

This is what the downhill full of rocky switchbacks looked like (below).  See those ants at the bottom?  That’s probably Brittany and Courtney.  Most people are way faster going downhill, but that was probably my slowest part with my new blister friends.  The Chacos were definitely a good temporary solution though. 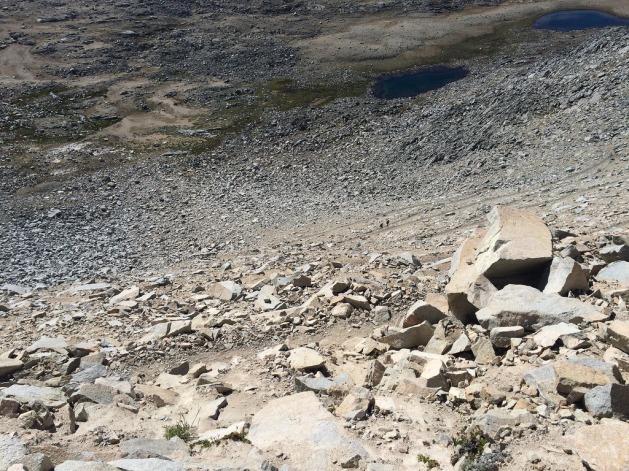 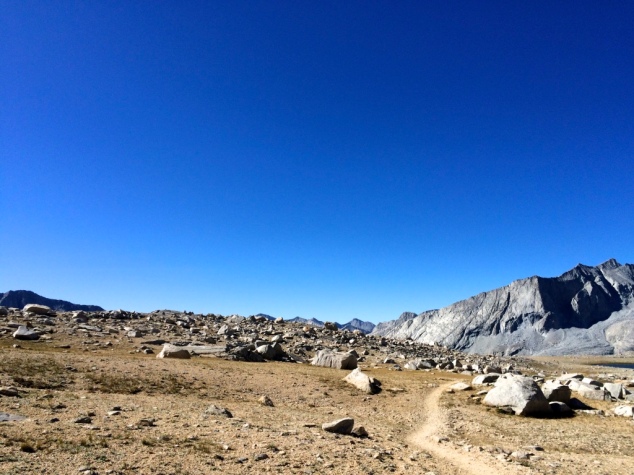 Once you get a decent ways down, it starts looking pretty barren. But pretty quickly you get back into some trees and streams. We stopped at a nice little spot for lunch, meeting up with the rest of the group. I would have LOVED to have taken a nap at this quiet little place where we had lunch, but I was quickly outnumbered because everyone wanted a head start from the crowd for getting to our next stop in case it was as crowded as last night. 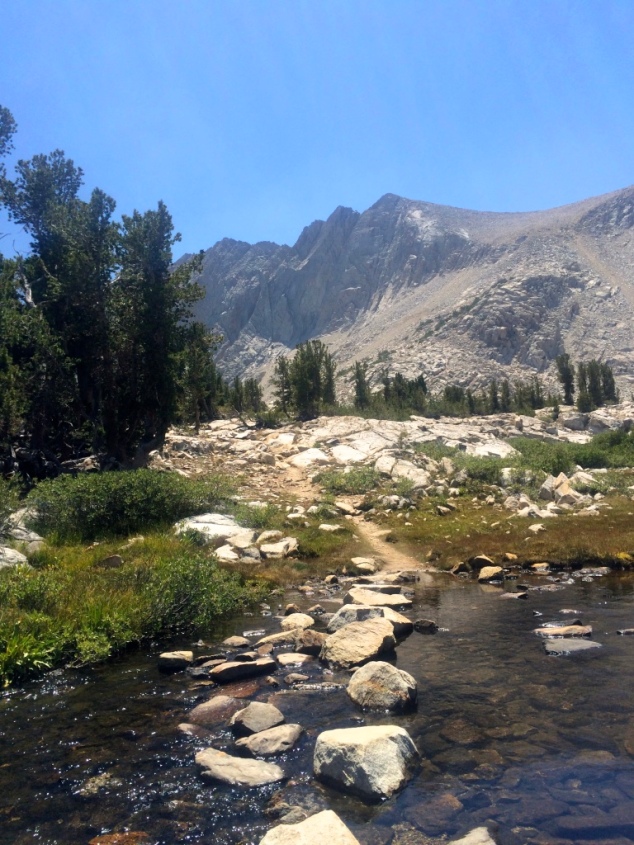 J:  We always started out hiking as a group from the top of the pass or from our lunch spot, but I pretty quickly typically ended up hiking by myself for most of the day.  I didn’t mind at all.  I could go at my own pace with my gimpy feet and not worry about anyone else. AND I could sing along to my tunes while I got lost in thought or in the crazy beautiful scenery. 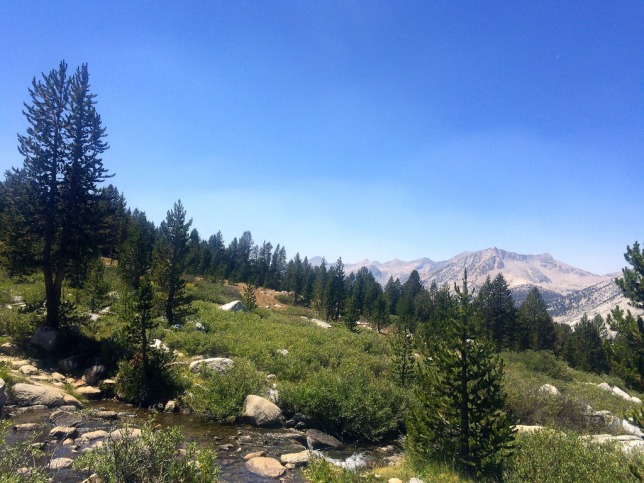 I don’t think I ever really got my groove back on Day 15, because the second part of the day was pretty hard too. I wasn’t ready for the incline already, and we had to ascend a couple thousand feet over the next two miles – it just never stops! Luckily, it was really pretty, which is what I said, and felt often. And also, I had the trail to myself, so I turned on the tunes, which certainly helped. 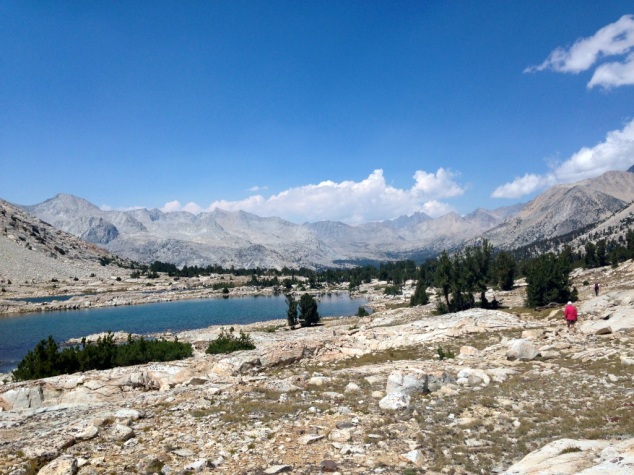 I stopped at this spot (above) for a little snack (probably some Goldfish) and chilled out for a good 10 minutes, which felt nice. Jennifer and I were hiking separately at this point, and she came up a few minutes into my pit stop, but since we were so close to camp she trucked right on ahead and I met her there. This was just one of those times that I felt like I needed to sit and reflect on all the miles and the gorgeous scenery. And have a snack – duh. 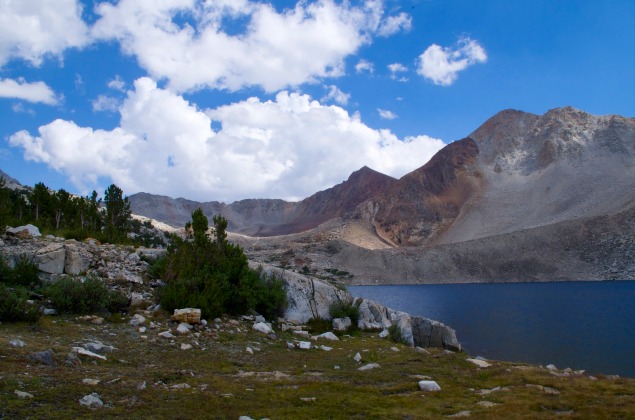 Marjorie Lake, with possibly Pinchot Pass in the back…

Needless to say, Marjorie Lake was drop dead gorgeous. We’d come to expect nothing but gorgeous campsites, and were never disappointed. It felt good to “let” our friends hike ahead of us, as we had full trust in them to find a beautiful vista to settle in at. 😉 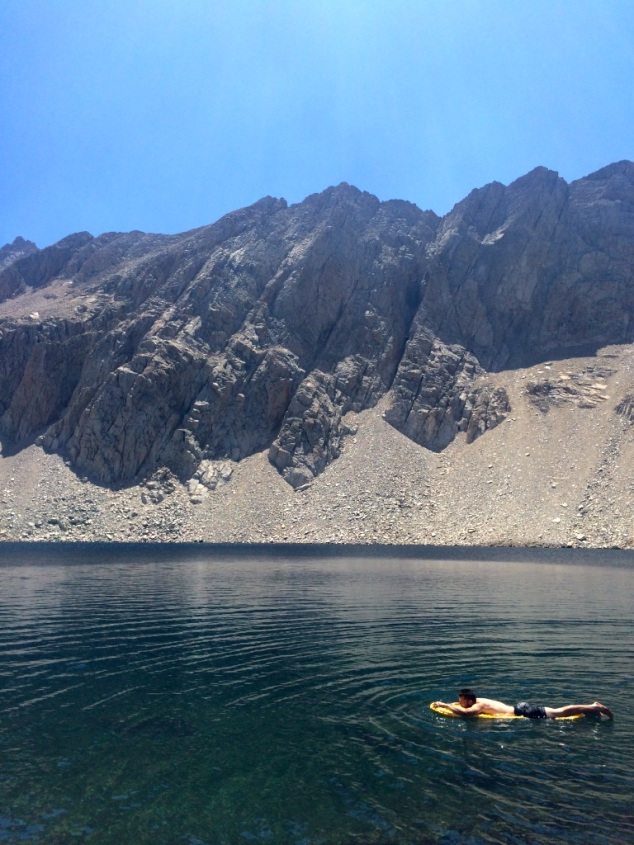 We’d gotten to camp early again (maybe not 2PM, but close), which gave us plenty of time to lounge around. Since we had nice, freshly ‘laundered’ clothes, we didn’t even have laundry to do! Andrew had found a leak in his sleeping pad, so he used it as a raft in the lake to try to locate the hole (well, and to float around – briefly).

J:  Don’t be fooled by the crystal clear blue water and sunshine.  That shit was freeeezzzing!  I think Heather was the only one who was smart enough not to get all the way in, but I thought it was worth it.

At some point in the day, Samuel had sauntered past us and hiked with our group until camp. He stuck around and “sunned” (as he called it) for a while, then went on his way up and over Pinchot Pass – he was shooting for a free day at Rae Lakes, and wanted a head start to make sure that happened. 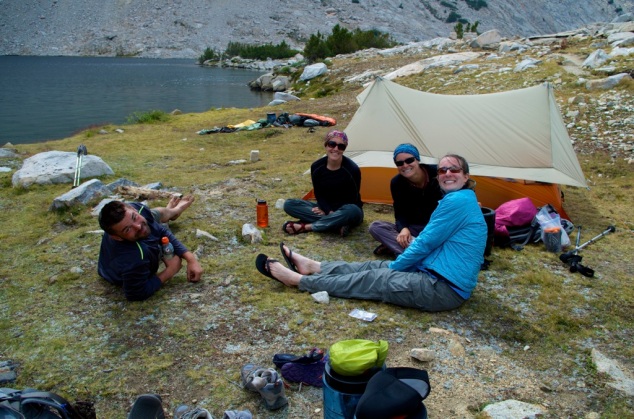 In addition to bringing Love Letters, Brittany had also brought some dice, so we played Farkle, which was pretty fun, but it involved a lot of math that I hadn’t prepared for (math is hard when hiking). I probably lost count of my score after my first round but I tried to play it off ;).

J:  My score at Farkle was a consistent zero, so that math was pretty easy to keep track of.  It was nice but sort of weird having so much free time at camp.  Heather and I were used to hiking all day with longer breaks in between and then getting to camp with just enough time to set up, eat, and go to bed.  It was awesome to hang out and relax for a while, but I think we both decided we liked our hiking routine better with our breaks spread throughout the day. 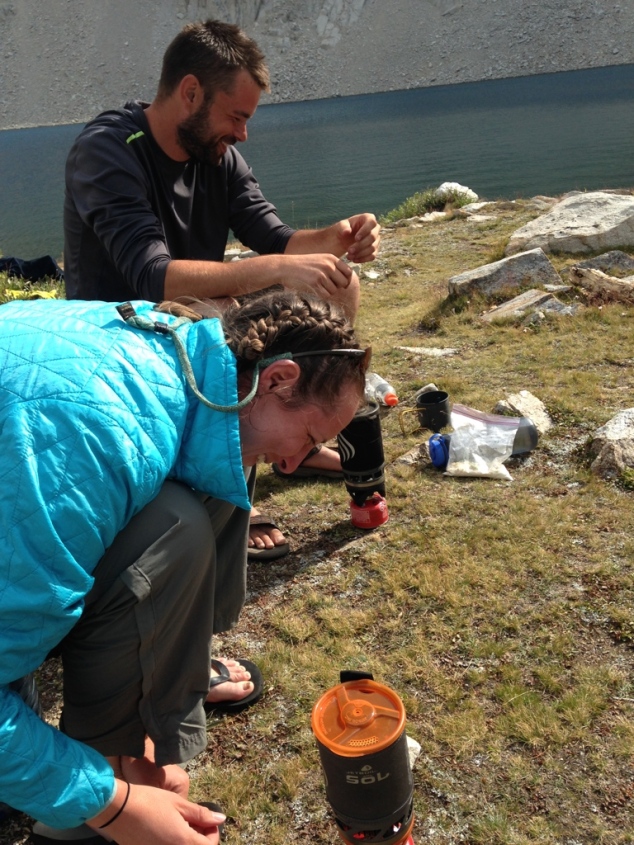 At some point on this trail, our hiking friends turned into senior citizens and were eating dinner at like 5PM or earlier. I couldn’t bring myself to eat that early, but it was fun watching Brittany and Andrew have a race with their Jetboils. It’s the little things that keep you entertained at camp!

Fortunately our site was rather small, and it didn’t get nearly as crowded as we thought. There were a few people scattered here and there, but it was much quieter than the night before, which meant the next morning would be a breeze! 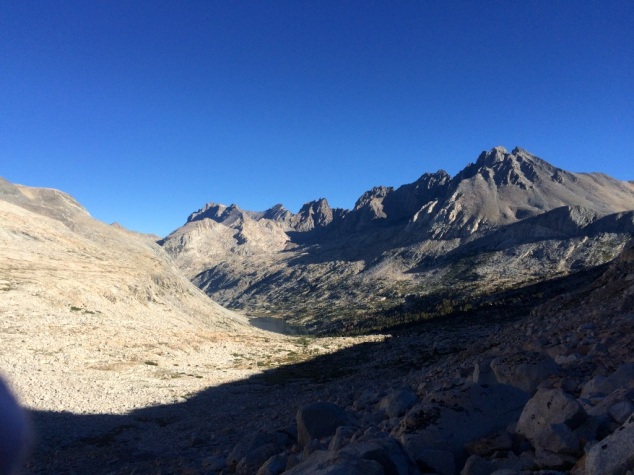 Up next – Pinchot Pass, the Woods Creek suspension bridge, and liquid energy!