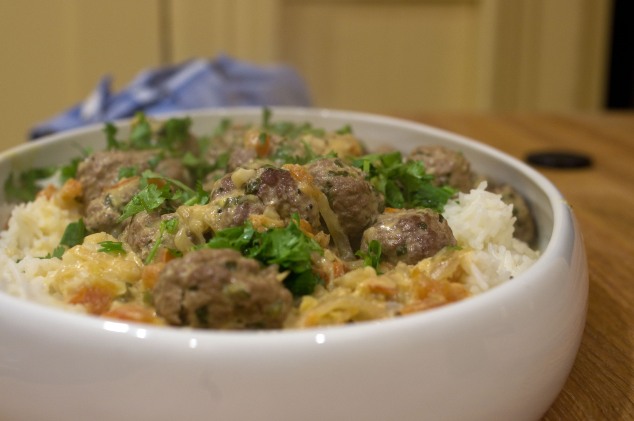 I am on a huge Indian kick lately. You wouldn’t know it from what you’ve seen posted around these parts lately, but I’m dead serious. Those of you living in the Bay Area already know this – there are a plethora of Indian eateries around these parts. Because of that, I’ve decided that Indian food is my new favorite take-out staple.

Sorry, Thai food, but I’m giving you the boot for a while. Maybe forever. It’s just that no one seems to make my yum woonsen salad like Thai Lagoon did, and it didn’t hurt that they were exactly 6 doors away from our house.

We ordered take-out from the neighborhood Indian joint the first weekend we lived here, and I was immediately sold. I ordered a HUGE “combo meal” the weekend Chris was in Singapore, and while sopping up my chana masala with garlic naan, I happily watched Something Borrowed (laugh it up) and almost drank an entire bottle of New Zealand Pinot by my lonesome. It was amazing (the food and the wine, that is. the movie served its purpose, which meant I was able to choose the movie for a change, because no one was home!!).

I’m sure we’ve had takeout from the same spot at least a handful of other times too. Despite their unwelcoming demeanor when I walk in to pick up my order, I always graciously take my food, somehow deciding that they’re allowed to have shoddy service so long as my food rocks, because in the end, we all win. 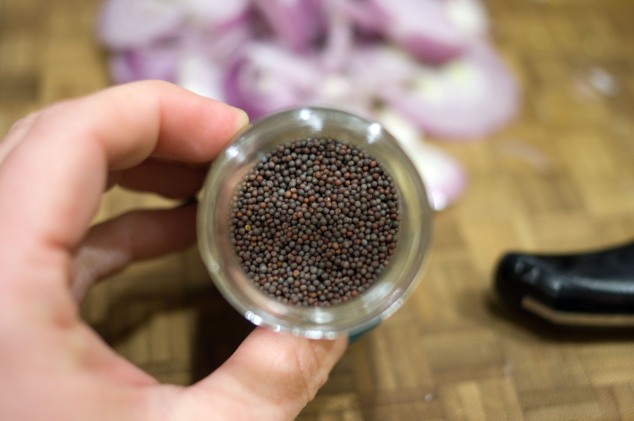 I decided I must learn to make chana masala, the tomato-y chickpea dish that I get almost every time I get Indian food, and as a result I surfed the Internets to figure out where I might find such a recipe, and for that matter, a good Indian cookbook. After Googling and Amazon-ing for a while, I finally decided on Madhur Jaffrey’s “An Invitation to Indian Cooking“, and although I’ve yet to cook from it, I am slowly perusing through it, waiting for the right moment to finally give that chana masala a try, and the other recipes I’ve bookmarked so far.

Today though, I’m sharing a recipe from another Indian chef I admittedly adore watching, Aarti Sequiera on the Food Network. She won “The Next Food Network Star” a while back (actually, the last season we watched it), and I was rooting for her all the way. Sure, part of it was because she wrote a food blog (and ironically just posted a recipe for chana masala), but the other part was because I really wanted an Indian cooking show to watch. Plus, I can only take so much of Giada’s boobs (or her large head, for that matter), and the other shows on that channel (other than Iron Chef, duh) are pretty lame. But! I did just learn that Michael Chiarello (of Napa’s Bottega) is going to be on The Next Iron Chef, and you best believe that will be DVR’d with a quickness.

So yeah, on to sharing. We had some friends in town this past weekend, and since they were coming in right around suppertime on Thursday night I’d volunteered to make dinner. My requirements were that the dish had to be straightforward, void of constant tending-to, manageable on a weeknight (night before prep a plus), and easy enough to make for 5 people without dirtying up every dish in the house. A homemade curry was a no brainer, and I remembered a recipe Aarti made the other day where she added an Italian twist (meatballs) to a curry dish – perfect!

The meatballs were easy peasy to throw together, and they probably benefit from being refrigerated overnight anyway, so that they can adhere together a little better. Plus, it saved me some time the night I made it since step 1 was already complete. The Serrano chiles were super spicy and perfect with the creamy coconut curry. The recipe below is essentially a doubled version of hers, which is meant to serve 8, but either our guests were starving or it was that damn good, because there was 1 serving left by the time it was all said and done.

The added bonus? You’ll probably have some leftover sauce when all the meatballs have been eaten, and I just know it’ll go with just about anything you toss into it. Better yet, a spoon would probably work just fine.

instructions
for the meatballs: In a large bowl, mix the ground beef, chile, ginger, cilantro and 2 teaspoons of salt together using your hands until just combined. (Don’t mix any more than this or you’ll end up with tough meatballs!) Roll the meatballs into 32 similarly-shaped balls, placing them on a parchment-lined baking sheet. Place in the fridge when they’re all rolled until ready for use.

for the curry: In a large Dutch oven over medium-high heat, warm the coconut oil until nearly smoking. Add the mustard seeds, covering the pan with a lid so you don’t get popping seeds all over you. When the spluttering subsides, add the shallots, garlic and ginger and cook until golden brown. Then add the ground coriander, cumin and cayenne pepper. Stir, and cook 30 seconds. Add the tomatoes and cook until they soften, about 5 minutes.

Add the coconut milk and 1/2 teaspoon salt and bring to boil. Turn down to a simmer and add the meatballs. Simmer until the meatballs are cooked through, 15 to 20 minutes.

Right after you add the meatballs, start the rice. Add rice and 3 c water in a saucepan and bring to a boil. Reduce heat to low and simmer 15-20 minutes, until rice is cooked through. Remove from heat and set aside.

To finish the curry, add the cilantro and lime juice. Shake the pan gently to mix them in, and then taste for seasoning. Serve over rice.

One thought on “Great Balls of Fire”